This photo has a movement, colors, and animal as you can see the Pisces.

This photo has been taken by Michaela Skovranova.

She wrote about why she toke this photo  (These beautiful creatures are now traveling along coasts of Australia. During mating season swimmers and divers can often hear the male Humpback whales sing their love songs underwater. Humpback whales known to produce a series of repetitious sounds at varying frequencies known as whale song – it is believed that the purpose of the song is to attract a mate.
The male will repeat the same song, over and over again with one song lasting up to 30 minutes. These unique sounds can travel kilometers underwater.) 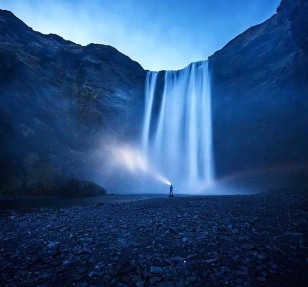 This one has been taken by Stephen Alvarez, as you can see there is a man over there looking at the river also there is colors, Movement and lines.

Stephen said (A single headlamp lights the mist at the bottom of Skogafoss in Southern Iceland at 68 meters tall Skogafoss is by no means the largest waterfall on the island but it is among the most beautiful. Typically it is surrounded by throngs of visitors but at 11 o’clock at night I had the place to myself. For more images from my travels to #Iceland )